Today's band who fit into the 'slipped through the cracks of history' category are... 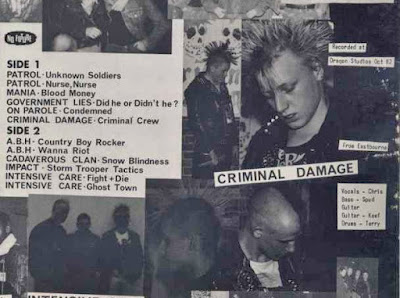 Another band from the early punk / Oi! Days who only ever officially released one song, Eastbourne’s Criminal Damage are a band whom very little is known about, and whose history is often further confused due to the simultaneous existence of another band with the same name, who hailed from the Hatfield area just north and a bit sideways of Watford (and included future 4-Skins member Paul Swain on guitar).
This particular Criminal Damage though were formed in the town of Eastbourne on the south coast. Some, if not all, of the members had known each other since school, and swapped spud guns for guitars once they got to the ripe old age of 16 or so. The band appears to have been fairly short-lived, but got to support The Partisans in Hailsham, as well as playing various other local gigs. They recorded a three-song demo in 1982, with one of the tracks off it (“Criminal Crew”, a minor punk classic if ever there was one) being picked up by No Future Records for inclusion on their ‘A Country Fit For Heroes Vol.2’ compilation.
The song was written by singer Chris Cotton and recorded at Dragon Studios in Eastbourne in October 1982. The rest of the band featured: Keith Hazelden (guitar), Tony ‘Spud’ Murphy (bass) and Terry ‘Tez’ Hookham (drums).
Whether much happened to the band after that requires some further digging, but seems unlikely if the following comment posted on youtube is anything to go by!
Rjun67: “My brother, David 'Canary' Poole was the genius manager of Criminal Damage. He named the band, he paid for this performance to be recorded and for all their instruments with his tax rebate. Then the bastards sacked him and sold all the instruments for drugs!”

Some of the former Crim-Dam members did eventually resurface in other bands though to better effect. In 1986, Keith Hazelden and Tez Hookham formed Brighton thrash metal band Virus (under the aliases Henry Heston and Tez Kaylor respectively, and with Hazelden - pictured left - on vocals and rhythm guitar). Virus went on to issue three studio albums between 1987 and 1989, becoming a respected name on the UK thrash metal underground before splitting in 1990. Virus reformed in 2008, but with lead guitarist Coke McFinlay the only original member, and having now relocated to Dundee in Scotland. If anyone knows what became of singer-songwriter Chris Cotton, then please get in touch either on here or via the HCTNP youtube/facebook accounts.
Meanwhile, Terry drummed in Eastbourne ‘punk rock n roll’ outfit Hateball from 2002 to 2006, who played with the likes of the Damned, UK Subs, ANWL, Discharge, Beerzone, Exploited, Dogs D’Amour, King Kurt, Meteors and Therapy? Hateball self-financed their debut album ‘Live Now... Die Later’ in 2004, before the band went through a change of singer and then ultimately broke up. Terry later formed Brutal Regime with former East End Badoe Chris Tibbott.
Elsewhere, Belgian band Funeral Dress covered “Criminal Crew” as “Funeral Crew” on their 1996 LP ‘Singalong Pogo Punk’, and more recently the song has been resurrected by new UK-Oi! mob Tooled Up, who give it a fresh dusting down in the clip here:

Some other related links... (VIRUS)

Finally, I would also recommend checking out a more recent band named Criminal Damage, who wear their Blitz influences on their sleeve and have made some cracking tracks such as this one (“Anesthesia”) taken from their self-titled 2006 LP:


The next link though is just a picture (of a flyer for ACF4H Vol2) - click on it by all means, but it won't do owt else. 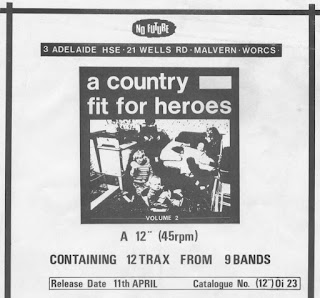 Any additional or amended info to the above articles is always welcome. Please get in touch via the comments option below, or through Here Comes The New Punk on Facebook or Youtube. Cheers. 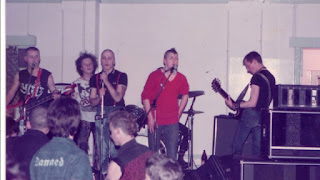